Posted by Susan Kite at 6:58 PM No comments:

Because of Jesus Christ, All Things Are Possible | #BecauseOfHim

I am So Excited about Zorro 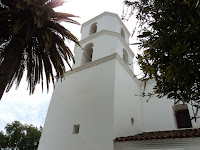 I usually don't write more than one blog a month, but now that all four of my new books are out and official, I have to send another post. I am so excited about my new Zorro books coming out. It's a trilogy I drafted a while back and was recently picked up by Bold Venture Press, sanctioned by Zorro Productions, with the covers created by Francisco Silva. (Mr. Silva pulled in the action and the emotion of the novels so beautifully.)

So why in the heck did I choose to write Zorro stories back in the beginning of a new millennium?

How many of you are old enough to to remember turning on the bulky old TV and watching a black horse with a rider dressed all in black race across the small screen? That was back in the late fifties. I was around six at the time so I was mainly watching the horse (just as I watched Fury, Trigger, etc.) I was also living in Alaska, so there were many things to keep my attention--snow, skating, camping. Anyway, I didn't see all of the Zorro episodes until I was grown.

By then I could appreciate all of the nuances of the show. Guy Williams, (who in my opinion was made for the role), the marvelous writers, the detail Walt Disney put into the show, as well as the coal black horse, Tornado. As brief as it ran, there were over 70 episodes and they were all fodder for thought. Was this girl or that one the best match for Zorro/Diego? What happened next? Or what happened during that time the episode didn't cover? Or simply what other adventures might Zorro have?  (Even the trilogy, has a very tenuous link to an episode.)

I wrote what came to my mind, let friends critique the stories and make suggestions. During this time my writing skills improved and my thoughts led to original characters and their adventures. I still never forgot Zorro. I have eight published books, (not including the Zorro trilogy), but when I was invited to write a story for the anthology, Zorro: The Daring Escapades, late in 2019/early 2020, I was thrilled.

Now the publication of Zorro's Pacific Odyssey is beyond thrilling. I am so happy to be revisiting the early 1800's southern California and especially writing about a hero who has long sparked my imagination.

I like my historical fiction to be as accurate as possible. So for Zorro's Pacific Odyssey, I started with non-fiction books from the library, looked online, and ordered books I couldn't find locally. I still have my copy of Beasty's cutaway book of the old man 'o war sailing ships. This research became the story of a hero (Diego de la Vega) kidnapped by ruthless men and indentured on board a British cargo ship under the hand of a cruel and vindictive captain. (Zorro and the Outward Journey.) It's also the story of heroic Californians who refuse to be crushed under tyranny, and about a friend from far away who helps Zorro, the person who saved his life when he had been kidnapped. (Zorro and the Forbidden Country.) How Zorro manages to return home and root out the evil in his homeland is the third book of the trilogy, Zorro and the Deadly Homecoming.

Some people shook their heads at my desires to write stories about TV characters almost thirty years ago, but I owe much to Zorro. I am grateful for my own odyssey. 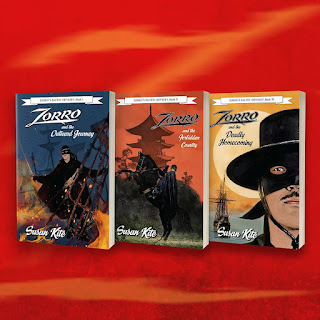 All in all, I am very proud of these novels and hope readers will like them, too.

My soon-to-be-book, First Realm, a prequel to my previously published Realms of the Cat is the adventures of a young TB (Toe Biter). Part of it was written almost thirty years ago, but despite how humorous kittens are as they grow up, readers like adventure as well.

What adventures could a young black kitten have besides catching bugs and getting slobbered on by a big red dog (no, not Clifford)? Especially if that kitten lived in a house in the country where nothing happened? Then I remembered reading about a secretive activity occurring near where we lived--something I found out was, unfortunately, quite prevalent.

That something is dog fighting. 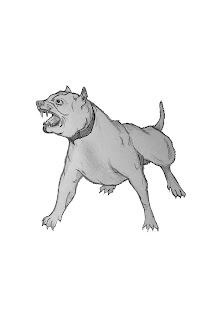 When I wrote the draft of the story, incorporating the older kitten scenes into the adventure, I didn't know a lot about dog fighting. I basically wrote a story of a big dog and his doggy friend who are kidnapped by dog fighters, and their kitty pal who leaps into the fray to save them. Then I added some wild critters to help the trio get away.

All I knew was that I hated the idea of animals being forced to fight each other. Now that I have done some research, I loathe it. Here are some statistics supporting my loathing.

1. It is estimate there are at least 16,000 dogs that die each year from this 'sport.'
2. Fighting dogs are raised under cruel circumstances to be aggressive and strong. They are chained, beaten, starved to make them more suitable for the fighting pits.
3. Less aggressive animals are used as bait animals. The fighting animals practice attacking, injuring, or killing these bait animals.
4. Other crimes often accompany dog fighting. Gambling, drugs, guns. Dog fighting is considered a gateway crime. It is also illegal in all fifty states.
5. A single fight can last for more than two hours.
6. More than 50% of police officers have encountered dog fighting in their careers.
7. As many as 500 animals can be seized in a single raid. Rehabilitating is often extremely difficult or impossible.
https://petkeen.com/dog-fighting-statistics/
https://www.humanesociety.org/resources/take-action-stop-animal-fighting#
Posted by Susan Kite at 6:45 PM No comments: