Getting the Groove Back

I did not wait a year and a half this time to write another blog post. This time it's only been six months! I think I might be getting my writing groove back. How did I do that? Not really sure. Simply saying that I have more time isn't the total reason. I have had more time since last May when I retired. Several people told me that retiring and walking out that door isn't the golden bullet that enables you to do all those projects you have dreamed about doing 'when you had time.' They also said it takes a while to settle into your new reality and new schedule.
In my case, the new reality included selling a house and moving halfway across the country, as well as several health issues. Now that we have been in our new home for almost three months, I have a place to do my writing (the sitting room) and a place to work on my illustrations (a local wellness/senior center where they have classes), 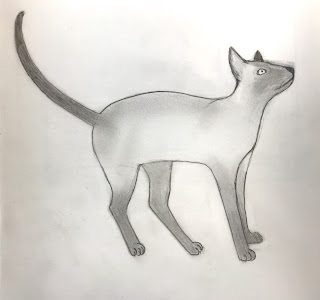 and a place to walk when I need to get the kinks out (nice walkway in the community). Not a rigid routine, to put it mildly; many things tend to scream for equal attention, but it's getting there.

Getting in the groove is an individual thing. I suppose there are some who do it quickly and there are those whose life issues don't allow them that opportunity, or become the excuses to never getting that groove. I only hope that I always have at least a small writing groove I can continue to work in, regardless of what my situation is.

I do have to add a plug for NanoWriMo. Their various writing incentives have really helped this time. They do their big project in November, but do a couple of Camp Nano's during the year. I decided to join their April Camp and work on a story idea that had bounced around in my head for several months. With a Nano camp, you can set your own goal and I did--20,000 words. I have 15,000 so far and doing about 1,000 words a day average (don't do Sundays) for the month. I would highly recommend it. I might try the big November one this year now that I have my 'groove' back!

Quick note: Portals has become Realms of the Cat with a contract from my publisher. They will use my illustrations if I can send them in with white background. That is another issue.

Thanks for listening. And speaking of listening, I may get a voice recognition program so that I can't use any health issues as an excuse. Any recommendations?
Posted by Susan Kite at 4:43 AM No comments: