Backstory about Realms of the Cat

The book is no longer coming. It has arrived!!!  It has been an exciting month of promoting and enjoying seeing my 'baby' in my hands. 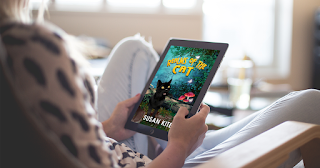 You already know the story, (if you read my sporadic blogs, LOL), but there is a back story that took twenty years to develop. Some of the pieces you already know if you get notifications about my author page on Facebook. (And you are certainly welcome to go to my author page and like it!)

However, with that said. Realms of the Cat came about in a strange way. Back in the late 90's, I wrote a story about young TB, Butch, Melvin, Buck and several other pets that I tentatively called I am Not a Disease! It was more real life; what the writing magazines called anthropomorphic animal story. They also said those were dead. (I wonder if they have read any of Avi's Poppy stories, or Erin Hunter's Warrior books?) Anyway, I wrote a novelette about TB's adventures as he was growing up and then I left it sitting in a file since I wasn't publishing at that time, I was writing fanfiction.

As the years passed, TB grew up, enjoyed life and then got sick  and passed on. It was the same with Butch. Callie (the queen of the  cats in my book) found a new home and only recently died. Melvin and Buck lived a good long time, too. Even little Diego, who appeared briefly in the beginning of Realms, has since passed away.

Then one day, about five years ago, while meeting with my Etowah Writers group, the leader, Grant Fetters, suggested a prompt for a chapter. That prompt became the beginning of what was then called Portals. That meeting between TB and Rex was the result of that prompt and demanded to be continued. I did, ending up with a 200 page story of the bonds of friendship overcoming death and fear. It became a story of diverse characters working together to save a person- a little girl kidnapped from her rightful place. I have enjoyed writing it and if you choose to read it, I hope you enjoy reading it as well.