Don't Let a Pandemic Take Away Your Joy This Year!

Regardless of one's religious affiliation, or even if you don't have a religious affiliation, this is usually a season of joy and gratitude. This year should be no different--especially this year! I wanted to wish everyone a blessed season, safety and health, peace and good will. I am including a small article I did for a Tennessee paper last year. It was from a time more than thirty years ago when my children were little....

Christmas can be such a magical time of the year, even under adversity….

There was a Christmas when I wondered if we’d be able to give our young children Christmas presents. I had begun working for the McMinn County School system a few months earlier and we were still recovering from six months of unemployment.

It’s times like that when you learn to count your blessings. I finally had a job and a car to get to said job (we hadn’t had a running vehicle for several months). We found a place to rent in Athens—no stove or consistently running water, but it sheltered us. Still, the paychecks allowed no extras—no actions figures or dolls, no fancy tree, no big turkey dinner.

Then the miracles began. A friends said, “Come out to our land and cut down a cedar to decorate.” So we did and decorated it with our family ornaments and things the kids made. Then someone at Niota School, where I worked, caught wind that we had been cooking dinners on a hot plate. So one of the teacher’s husband, who worked at Athens Stove Works, got a small stove, the teachers donated for it and we had a stove for Christmas. (Hallelujah! I could bake again!) Then a service group from local Tennessee Wesleyan College took our two kids out for an outfit and toys. The kids were so excited! Then our church brought us a turkey and all the trimmings.

We had so much to be thankful for that year.

We decided that we were going to pay it forward after that whenever we could. A couple of years later, we learned of someone who had fallen on hard times. We bought an outfit for each member of the family, and some toys for the kids. Our church donated a Christmas dinner for them, too. We wrapped all the presents up, loaded everything in a couple of garbage bags, and then wondered how we were going to get this onto their porch and get away without being caught. These people lived way out in the country with no neighbors within a quarter mile and no trees to hide behind.

We got creative and let the local missionaries know what we were doing. These were strapping young eighteen and nineteen year old boys who could run—fast! We drove as close as we could without being seen, and parked next to a hedge row. The two missionaries got out with the bags, crept around the hedge row and to the porch brightly lit by a single bare lightbulb. They set everything down, banged on the door and then ran, coattails flapping. Over the hedge they leaped and into our car. Off we sped, the young missionaries and our kids laughing like crazy in the back seat.

What a wonderful feeling that was, knowing we had helped someone as we had been helped in our time of need. Isn’t that what Christmas is all about? Every one of us has been given the greatest gift mankind could ever receive on Christmas Day. Let’s pay it forward a little bit. Light the world that seems to have grown a little dim with pessimism and hopelessness.

May you all be blessed ﻿with those things you stand in need of as well as the spirit of gratitude.

A picture of an even further back Christmas past. I think I might have also wanted my two front teeth, too. LOL 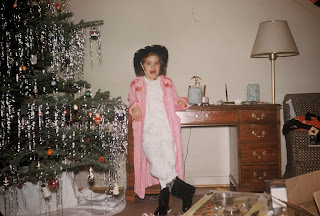 Posted by Susan Kite at 7:26 PM No comments: