Where do the Stories Come From? #AuthorToolboxBlogHop

Where do the Stories Come From?

Someone once asked me where my stories came from. I will have to be honest, many of them came from the television I watched. Yes--that great wasteland we were told in the seventies would rot a child's brain. When I was a kid, I watched a great deal of Westerns. They were the big thing back then. I have a picture to prove it! 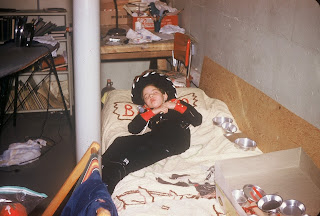 Tuckered out saving the West.


I watched television for a while and then created new stories for my favorite characters. I won't tell you which characters. The picture will give you a good clue as to how long ago this was. As I grew up, I used those settings and some of the characters, threw in my imagination and had so much fun. Alaska, New Orleans, forests and beaches, I could make up stories wherever I was.

In my grown up years, that imagination drew me toward fan-fiction. I have scads of stories. They were easier to write and didn't depend on publishers, agents, marketing, or the like. But eventually, that wasn't enough. My writing had improved and I wanted my book on that shelf; something I had totally created and that others enjoyed reading. So where did these new ideas come from?

Let's take my latest novel, Moon Crusher. That one actually came from my fan-fiction days--sort of. I thought to myself- What would happen if a boy from the old days (1829 California-just a little past the time of most Zorro stories) was captured by fearsome reptilian aliens?  It's not that there weren't alien abduction stories. It's not that there aren't stories about old timey folks meeting technology. Or modern technology going back in time to meet pre-industrial individuals. There are plenty. I just had to give it my own spin.

I wrote my draft when I went to the YMCA to work out on a recumbent bike. I was a school librarian in those days, so I took my opportunities when I could. I had a notebook, a pencil, tuned out Bill O'Reilly, and wrote while I pedaled. It was disjointed, sometimes unreadable, but the story of a young boy in overwhelming circumstances took shape. And what's more incredible, the big bad aliens took shape, too. They weren't just demonic reptiles or cats or whatever. They had personalities. Despite his gruff, sometimes angry demeanor, Commander Ziron became heroic. Diego's friend, Rreengrol became his BFF. The otter people were both amusing and courageous. They were slaves who wanted to be free just as Diego did.

A reviewer pointed out that this wasn't just a story of space battles and a boy overcoming horrendous odds; it was also about diversity and how a group of very different beings learned to live and work together.

Wow! I like that. I like that in the stories I read, too. All about getting along even when life stinks....

Check out www.bookscape.com.
Posted by Susan Kite at 4:00 PM 8 comments:

At the beginning of the year, I made a promise that I would post a blog once a month. Already blown it by missing April. Maybe I'll make up for it in May by posting more than one. Believe I really will as I signed up for a blog hop. Never heard of it until my publisher mentioned them.


Anyway, April was a very busy month, even with the craziness going on. The first part of the month was not a good writing time, but with Camp Nano calling the shots, I was obligated to write a certain amount by the end of the month. My intention was to finish a sci fi I had been working on for over a year now, but after I began doing edits on my upcoming book Moon Crusher, I suddenly had an idea for a sequel to that book and now have over 20,000 words on Moon Crusher 2. I worked with the editor during the month of April, and received an attachment of a cover for the book last week. Moon Crusher is coming out on May 25th! Very exciting, even if time before its debut is limited. 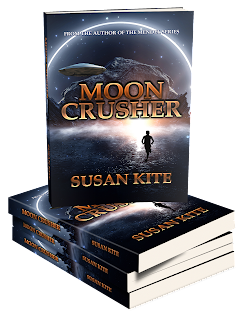 Another exciting event was the debut of an anthology from Bold Venture Press called Zorro, the Daring Escapades, which contains a novelette I wrote. To be perfectly honest, I feel legitimized in the writing of fan-fiction. What I have read in the book so far, these are very good stories! 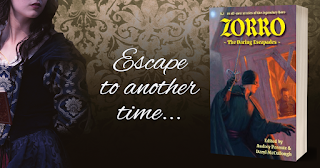 This is going to be a short one. Have to get back to writing!!!
Posted by Susan Kite at 1:26 PM No comments: